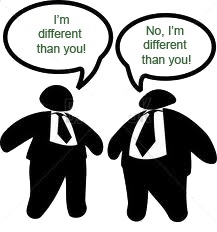 All of the Cartel parties have confirmed that their policy on the economy is the same, what else matters?

We have already seen their attitude towards democracy itself, especially so in the re-run of the Lisbon referendum last year.

Download .PDF image of the published A4 leaflet here… Yes-we-are-all-different.pdf

The Cartel are all now in agreement on the fundamental aim of our state’s economic policy, 3% budget deficit by 2014 – the EU has ordained it so and they will be checking up on the plan before Dáil Éireann is allowed to adopt any legislation on financial policy or budgeting for the next few years – the Germans have declared that they want to punish any state (us!) that falls short.

This pretence is well rehearsed; they dress in nice suites, put on practiced voices and preach down to us – we mere mortals could never understand economics or the ways of government.  The logic is that we need them … and one of their parties will be sure to do a better job – if only they get elected!  They have a host of well paid‘experts’ who also talk down to us, the Colm McCarthy types are everywhere, they are secure in their own ‘terms and conditions’ at the expense of ours!

Conditions are worsening on a weekly basis.

All the time conditions for ordinary people are getting worse, job losses continue, domestic small businesses are closing, youth are emigrating, families are broken.  Current estimates are that over 30 families per day are threatened with electricity disconnection.  Home loans are being called in – people get jailed for litter or petty fines – Garda resources are abused giving protection to the bank criminals – rescued developers get huge salaries from NAMA, it goes on and on and on and on.  Health care is again in the news; the chronic conditions facing cystic fibrosis sufferers has caused actual loss of life, A&E and other hospital services are being cut every day, waiting lists extend, quality suffers.  No one in government really cares – if they did care they would have acted long ago.

One might ask: “Who the hell is in charge around here?”

There is no accountability, no one held responsible, no one defending the rights of citizens – this weeks’ findings in relation to child abuse handling by the HSE and others is another example.

If we can’t find specific individuals who neglected their duties then we should go to their superiors, right to the top – we believe they are criminally responsible for the whole-scale destruction of our society.  When there is NO accountability or responsibility for anything how can we say we have any control over the way our country is run?  So far the only person locked up because of this crisis is the famous Toxic Bank Cement Truck man – he will go down in history, the real criminals will be off to enjoy their pensions!

So, now they tell us they are the same, finally!

All of the Cartel parties accept the basic proposition that there will be cutbacks, they only differ over the time scale, or whether there will be “front loading”, and if so, to what extent.  They ‘differ’ over whether there should be ‘stimulus’ to kick-start the economy, to do the same again, on more extended credit.  They ALL accept the targets and the current way of running our economy with only some cosmetic difference – this means that they are the SAME fundamentally but still they maintain that they are DIFFERENT, this is the deception.  The stimulus, by the way, according to Mr. Noonan would come from the sale of “assets”, he means the ESB and other valuable state companies that they want to hand over to friendly private investors – more vested interests.

However, the deception runs deeper.

Some other parties, as well as ICTU, TASC and others, that should be defending the interests of working people, have come out and repeated the same logic.  Some are putting more emphasis on “growing the economy”, “jobs” and other nice sounding phrases, but tagging on that the debt should be paid back over a longer period – to give us a chance etc. This is the SAME fundamental policy as advocated by the Cartel; are they being dragged into it or are they part of it already?

It seems that the ordinary working people have few friends.

So when, where and how will this economic and political crisis end ?

The ruling elite are sitting pretty – there is no end to their arrogance, so long as they are allowed to continue they will.  Also, they will squeeze more and more out of the people so long as there is something left to extract.  They have taken our fishing, our domestic industry (that was), destroyed our farming and the rural life depending on it, our natural minerals and resources, our food processing … now they want our water (its value), forestry and whatever else they think of.  Of course, they are already a long way down the road of making our health a commodity as well, health is a “revenue source”, and is treated as such.

What do we need to do? that’s the big question.

What we don’t need to do is respond in a quick reaction that isn’t thought out … Our response as a people must be to out-manoeuvre them; we can do this, one step at a time … but let’s not be blind to the forces we face – the vested interests are powerful.

First, let’s create the ideas, the basis for change.  At the same time let’s build the networking between people so that we are all in contact and can learn from each other – in whatever organisations people like, that doesn’t matter.  The primary thing is the ideas, what do we stand for – the theory if you like to call it that – it must have answers and be reflective of real life and the real world in which we live – it must also reflect and be in tune with the historic development of human society, our nation, and where we are going.

Simply stated, our theory is that the ordinary people, the men and women of no property, the working class, must take control over what are our democratic processes and systems.  We must take political power out of the hands of the ruling elite and the vested interests and exercise it fully ourselves.

Then we can BEGIN to solve the very great problems in our country.

This may all sound like a pipe dream or utopian idea on our part; we can only assure you it is not.  We mean every bit of it and will happily elaborate on anything anyone wishes to explore (either publically or privately), but for Irish people to advance we think the slogan must be “power to the people”, let’s have that.

It is our intention to elaborate a plan to allow this to happen, the elements of which have already been aired on these and other pages.  We invite you to join with us, or to cooperate with us, on the basis of this simple outlook – the people must be the holders of all political power.