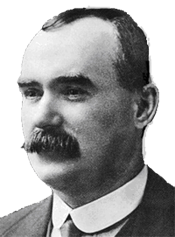 The original publication included the words of ’Be Moderate’/’We only want the Earth’ by James Connolly, they are available here.

First thing is to demand a solution which serves the people’s interests, and then, those with responsibility must be called to account for what they have done.

The world and not just Ireland is in deep crisis, but what is the nature of this crisis? Some say it is the “bad policies” or the “mismanagement” of Fianna Fáil or the greed of our banking sector and property developers that are to blame. Undoubtedly these have taken what must be criminal profits in past years, and still are, despite the devastation facing ordinary people. Others say that as a people we outstretched our own credit limits and must now pay the price for this – you can’t live beyond your means etc.

We don’t think that these approaches to understanding the crisis and finding a solution hold up.

We can’t say that Fianna Fáil/Greens brought down Wall Street or caused the worldwide financial crisis, neither did ‘our’ rogue bankers or developers do it. Equally, we can’t say that if any of the other main parties were in power things would be different – they wouldn’t.

The crisis has come to us from abroad, and, because we are a “dependant” economy, it has caused havoc. ‘Our own’ bankers and developers have been caught with their hands in the till, and lots of cash is gone missing!

Let’s consider the general factors causing the current crisis; understanding them is essential to working out the solution.

The causes of the crisis

(1) the unstoppable demand of finance capital for super-profits and their subversion of the world’s economy to their interests. The worlds financial monopolies engaged in speculation with financial instruments, mortgages, issuing unrestricted credit etc. i.e. That is, in general, activity that has not produced a single thing but generated huge profits for them. These banks and finance houses have always acted as if our society and economy was shaped and organised specially for their benefit – and of course they are right in this regard.

(2) the surrender of national governments, of both the imperial powers and of the dependant and neo-colonial states to the dictate of capital. Over the past decades regulation of the finance sector has been continuously relaxed and virtually eliminated – banks have reaped super-profits from deregulation and in return they have lined the pockets of the political forces that allowed it. The International Monetary Fund, European Central Bank etc. have been allowed to dictate economic policy in individual states; ensuring that they are geared for the extraction of maximum return by the ‘free market’, meaning monopoly corporations backed by finance capital.

(3) the growth in ‘globalisation’, which has occurred independently of the financial crisis, and the movement of capital and corporations to the source of the lowest labour costs and greatest tax and other incentives. We have seen profitable companies forcing down wages simply on the basis that the costs are lower elsewhere. Dell’s recent move to Poland saw them receive a further €55 million grant with EU approval, paying lower wages to Polish workers, even though they were making profits here.

A small look into history is necessary

The common theme running through the causes of this crisis is that monopoly rules, in particular monopoly banking. They tell us we have a ‘free’ market economy – but it isn’t free at all – nor could it be. Since the emergence of capitalism as the dominant mode of production (some hundreds of years ago), competition has naturally led to the control of market segments and whole industries by monopolies – eliminating ‘free’ trade. This gave rise to finance capital as a requirement of industrial development and it in turn has developed into monopoly – with very few financial institutions controlling the entire world economy.

History has determined that this is how our society has developed; and it has left us with a major problem. That is, while workers collectively produce all the material things that we need for our existence, ownership of this process is private. The owners of capital take the profits and also decide what is produced, when, to what quality, at what price etc. This system decides when huge sections of our society (people!) are unwanted, creating unemployment, exported or drawn back as capitalist demand requires. This drive for profit even makes peoples health a commodity to buy and sell; everything is subordinated to the need for generating profits – while capitalism exists there is no escape from this.

History needs to move on …

The means of production must be taken out of private hands and put into social ownership. This will end all the speculation and allow production in our economy, for the first time, to be organised on the basis of meeting the needs of the society, as opposed to what will make the highest profit for a tiny minority.
Anything else is to allow the continuation of a barbaric social order that has the world in turmoil, millions starving, recurring wars, uncertainty, poverty etc.

There is a need to take both a short-term and a long-term view on this question, to respond to both the immediate needs of people and to seek a long-term solution once and for all.

In the immediate / short term:

In the longer term:

This economy will require the participation of all able bodied people, empowering both community and individual, giving back the dignity of contributing through work.

thefuture Initiative urges everyone to support the protests against the cutbacks.