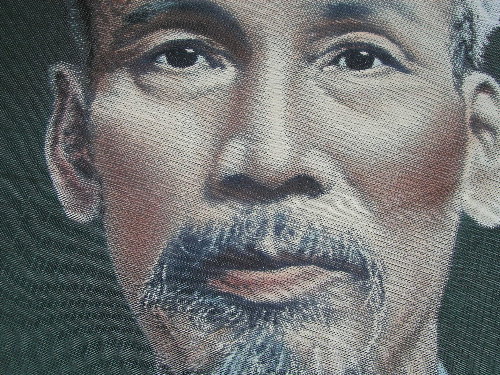 “All men are created equal. They are endowed by their Creator with certain inalienable rights, among these are Life, Liberty, and the pursuit of Happiness”

This immortal statement was made in the Declaration of Independence of the United States of America m 1776. In a broader sense, this means: All the peoples on the earth are equal from birth, all the peoples have a right to live, to be happy and free. The Declaration of the French Revolution made in 1791 on the Rights of Man and the Citizen also states:

Those are undeniable truths. Nevertheless, for more than eighty years, the French imperialists, abusing the standard of Liberty, Equality, and Fraternity, have violated our Fatherland and oppressed our fellow-citizens. They have acted contrary to the ideals of humanity and justice. In the field of politics, they have deprived our people of every democratic liberty. They have enforced inhuman laws; they have set up three distinct political regimes in the North, the Center and the South of Vietnam in order to wreck our national unity and prevent our people from being united. They have built more prisons than schools. They have mercilessly slain our patriots- they have drowned our uprisings in rivers of blood. They have fettered public opinion; they have practised obscurantism against our people. To weaken our race they have forced us to use opium and alcohol. In the fields of economics, they have fleeced us to the backbone, impoverished our people, and devastated our land. They have robbed us of our rice fields, our mines, our forests, and our raw materials. They have monopolised the issuing of bank-notes and the export trade. They have invented numerous unjustifiable taxes and reduced our people, especially our peasantry, to a state of extreme poverty. They have hampered the prospering of our national bourgeoisie; they have mercilessly exploited our workers. In the autumn of 1940, when the Japanese Fascists violated Indochina’s territory to establish new bases in their fight against the Allies, the French imperialists went down on their bended knees and handed over our country to them.

Thus, from that date, our people were subjected to the double yoke of the French and the Japanese. Their sufferings and miseries increased. The result was that from the end of last year to the beginning of this year, from Quang Tri province to the North of Vietnam, more than two million of our fellow-citizens died from starvation.

On March 9, the French troops were disarmed by the Japanese. The French colonialists either fled or surrendered, showing that not only were they incapable of “protecting” us, but that, in the span of five years, they had twice sold our country to the Japanese. On several occasions before March 9, the Vietminh League urged the French to ally themselves with it against the Japanese. Instead of agreeing to this proposal, the French colonialists so intensified their terrorist activities against the Vietminh members that before fleeing they massacred a great number of our political prisoners detained at Yen Bay and Cao Bang.

Notwithstanding all this, our fellow-citizens have always manifested toward the French a tolerant and humane attitude. Even after the Japanese putsch of March 1945, the Vietminh League helped many Frenchmen to cross the frontier, rescued some of them from Japanese jails, and protected French lives and property. From the autumn of 1940, our country had in fact ceased to be a French colony and had become a Japanese possession. After the Japanese had surrendered to the Allies, our whole people rose to regain our national sovereignty and to found the Democratic Republic of Vietnam.

The truth is that we have wrested our independence from the Japanese and not from the French The French have fled, the Japanese have capitulated, Emperor Bao Dai has abdicated. Our people have broken the chains which for nearly a century have fettered them and have won independence for the Fatherland. Our people at the same time have overthrown the monarchic regime that has reigned supreme for dozens of centuries. In its place has been established the present Democratic Republic.

For these reasons, we, members of the Provisional Government, representing the whole Vietnamese people, declare that from now on we break off all relations of a colonial character with France; we repeal all the international obligation that France has so far subscribed to on behalf of Vietnam and we abolish all the special rights the French have unlawfully acquired in our Fatherland. The whole Vietnamese people, animated by a common purpose, are determined to fight to the bitter end against any attempt by the French colonialists to reconquer their country.

We are convinced that the Allied nations which at Tehran and San Francisco have acknowledged the principles of self-determination and equality of nations, will not refuse to acknowledge the independence of Vietnam. A people who have courageously opposed French domination for more than eighty years, a people who have fought side by side with the Allies against the Fascists during these last years, such a people must be free and independent.

For these reasons, we, members of the Provisional Government of the Democratic Republic of Vietnam, solemnly declare to the world that Vietnam has the right to be a free and independent country and in fact it is so already. The entire Vietnamese people are determined to mobilise all their physical and mental strength, to sacrifice their lives and property in order to safeguard their independence and liberty.