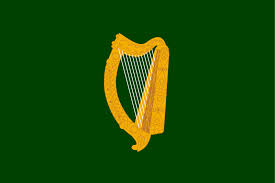 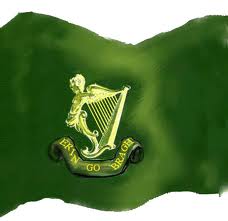 This article appeared in James Connolly’s Workers’ Republic on 8th April 1916, just weeks before the Irish Citizen Army marched out with the Irish Volunteers to declare the Irish Republic, for all of the people of Ireland.

The Council of the Irish Citizen Army has resolved after grave and earnest deliberation, to hoist the green flag of Ireland over Liberty Hall, as over a fortress held for Ireland by the arms of Irishmen.

This is a momentous decision in the most serious crisis Ireland has witnessed in our day and generation. It will, we are sure, send a thrill through the hearts of every true Irish man and woman, and send the red blood coursing fiercely along the veins of every lover of the race.

Since this unholy war first started we have seen every symbol of Irish freedom desecrated to the purposes of the enemy, we have witnessed the prostitution of every holy Irish tradition. That the young men of Ireland might be seduced into the service of the nation that denies every national power to their country, we have seen appeals made to our love of freedom, to our religious instincts, to our sympathy for the oppressed, to our kinship with suffering.

The power that for seven hundred years has waged bitter and unrelenting war upon the freedom of Ireland, and that still declares that the rights of Ireland must forever remain subordinate to the interests of the British Empire, hypocritically appealed to our young men to enlist under her banner and shed their blood ‘in the interests of freedom’.

The power whose reign in Ireland has been one long carnival of corruption and debauchery of civic virtue, and which has rioted in the debasement and degradation of everything Irish men and wonder hold sacred, appealed to us in the name of religion to fight for her as the champion of christendom.

The power which holds in subjection more of the world’s population than any other power on the globe, and holds them in subjection as slaves without any guarantee of freedom or power of self-government, this power that sets Catholic against Protestant, the Hindu against the Mohammedan, the yellow man against the brown, and keeps them quarrelling with each other whilst she robs and murders them all—this power appeals to Ireland to send her sons to fight under England’s banner for the cause of the oppressed. The power whose rule in Ireland has made of Ireland a desert, and made the history of our race read like the records of a shambles, as she plans for the annihilation of another race appeals to our manhood to fight for her because of our sympathy for the suffering, and of our hatred of oppression.

For generations the shamrock was banned as a national emblem of Ireland, but in her extremity England uses the shamrock as a means for exciting in foolish Irishmen loyalty to England. For centuries the green flag of Ireland was a thing accurst and hated by the English garrison in Ireland, as it is still in their inmost hearts. But in India, in Egypt, in Flanders, in Gallipoli, the green flag is used by our rulers to encourage Irish soldiers of England to give up their lives for the power that denies their country the right of nationhood. Green flags wave over recruiting offices in Ireland and England as a bait to lure on poor fools to dishonourable deaths in England’s uniform.

The national press of Ireland, the true national press, uncorrupted and unterrified, has largely succeeded in turning back the tide of demoralisation, and opening up the minds of the Irish public to a realisation of the truth about the position of their country in the war. The national press of Ireland is a real flag of freedom flying for Ireland despite the enemy, but it is well that also there should fly in Dublin the green flag of this country as a rallying point of our forces and embodiment of all our hopes. Where better could that flag fly than over the unconquered citadel of the Irish working class, Liberty Hall, the fortress of the militant working class of Ireland.

We are out for Ireland for the Irish. But who are the Irish? Not the rack-renting, slum-owning landlord; not the sweating, profit-grinding capitalist; not the sleek and oily lawyer; not the prostitute pressman—the hired liars of the enemy. Not these are the Irish upon whom the future depends. Not these, but the Irish working class, the only secure foundation upon which a free nation can be reared.

The cause of labour is the cause of Ireland, the cause of Ireland is the cause of labour. They cannot be dissevered. Ireland seeks freedom. Labour seeks that an Ireland free should be the sole mistress of her own destiny, supreme owner of all material things within and upon her soil. Labour seeks to make the free Irish nation the guardian of the interests of the people of Ireland, and to secure that end would vest in that free Irish nation all property rights as against the claims of the individual, with the end in view that the individual may be enriched by the nation, and not by the spoiling of his fellows.

Having in view such a high and holy function for the nation to perform, is it not well and fitting that we of the working class should fight for the freedom of the nation from foreign rule, as the first requisite for the free development of the national powers needed for our class? It is so fitting. Therefore on Sunday, April 16th, 1916, the green flag of Ireland will be solemnly hoisted over Liberty Hall as the symbol of our faith in freedom, and as a token to all the world that the working class of Dublin stands for the cause of Ireland, and the cause of Ireland is the cause of a separate and distinct nationality.

In these days of doubt, despair, and resurgent hope we fling our banner to the breeze, the flag of our fathers, the symbol of our national redemption, the sunburst shining over an Ireland re-born.