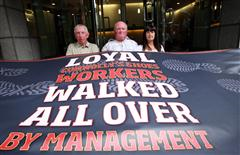 thefuture Initiative would like to ask all fair minded people to support the Connolly Shoes workers in their fight for decent working conditions.

Mandate Trade Union is hosting a support rally for four of their members who were unjustly dismissed by their employer without any notice and without compensation. Their employer, Connolly Shoes in Dun Laoghaire has closed its doors to the workers so the union is hosting the rally at an alternative venue belonging to the employer in Connolly’s Footwear in Bray.

Two of the staff members in question have 38 years and another has 30 years loyal service to the company respectively. The company has refused all genuine attempts to resolve the dispute.

As part of the support rally, Mandate will be calling on the owner of Connolly Shoes to settle this dispute by dialogue.  The rally will be address by, among others, the General Secretary of Mandate Trade Union John Douglas who is himself a native of Bray.

Additional information on this dispute is available from Mandate Trade Union

Read report from the rally here.