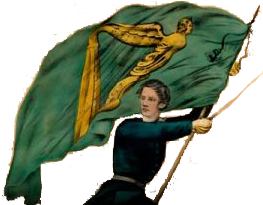 Thanks to people like Ruairí Ó Brádaigh there continues a strong tradition of revolution in Ireland – we need to carry that tradition forward today and give leadership.

In Ireland it is the ‘men of property’ who rule, north and south, sometimes their representatives carry orange flags, sometimes green and sometimes red – but their flags are a deception, the rich elite are served.

In the past we have seen different sections of the ruling class swap flags whenever it suites their purpose; to them politics is about self-interest and keeping their masters in power, the cost doesn’t matter and the people don’t matter.

Sadly, what might be revolutionary politics, the politics of change, is grossly misrepresented in Ireland today.

Some masquerade as republican while they cooperate with every policy that the ruling elite imposes on us.  This is true north and south, Parties and individuals claim to be republican while they facilitate every exploiter, native and foreign, who steals our wealth and resources.  These ‘republicans’ would take the 6 counties out of UK, only to surrender them to the EU, swapping one master for another.

Some masquerade as socialist, but disrupt every effort of the working class to organise themselves. These so-called ‘socialists’ deny our national rights and preach that there should be open boarders around Ireland.  But in today’s world ‘open borders’ only serve the banks, the giant corporations and the plundering of the imperialist powers.

These so-called ‘socialists’ and ‘republicans’ bring shame on a great tradition, they have abandoned any direct appeal to the people to rise up in defence of our own interests. With them, the ‘men of no property’ have been abandoned, as the song goes: they’ve “got the foreman’s job at last”.

We must re-assert the revolutionary ideas of republicanism and socialism, we must inform the public debate and expose the lies of the ruling elite and their enslaving politics.

Our aim must be the empowerment of the people, anything else leaves power in the hands of an elite and would not constitute a revolution.  That we are a sovereign people means that all political power derives from the people, to the exclusion of any vested interests.

The people have always been central to Irish Republicanism, to quote Pearse:

“Let no man be mistaken as to who will be lord in Ireland
when Ireland is free. The people will be lord and master.”

Revolutionary ideas are those that will change the underlying base of our society.  The politics of seeking a ‘better deal’, or ‘fairer conditions’, or ‘better welfare’ or ‘more jobs’ under the current conditions is not revolutionary, it is reformist, preserving the status quo.

Simply unifying Ireland, if it means that the same ruling elite continues, would not be a revolutionary deed.

Establishing the republic would be revolutionary, but simply expanding the Free State would not be.

To advance the cause of Ireland, to advance the revolution, we must identity opportunities and steps to be taken which will bring us closer to our objective – national freedom and the empowerment of the people.

The BREXIT situation presents such an opportunity.

Republicans should enter the debate demanding that the southern state should leave the EU, such a policy makes economic sense on its own, but with Brexit it makes double sense.

During this debate sham republicanism could be exposed for its EU unionism and its denial of the most basic republican principle – the sovereignty of the nation.

We should constantly repeat the Citizen Army slogan:

“We Serve Neither King Nor Kaiser, But Ireland!”

Local economy should operate to serve local communities, these need protection at a national level.

The debate around Brexit prompts us address the national question.

Resolving the national question requires building the broadest unity among the people.  Achieving this requires setting out the principles upon which unity is based, and then building the movement based on these principles.

We all have different ideas about politics, economy and a whole range of issues, however, we have a common interest.  Our common interests is that the Irish people alone should decide how our country is run, continuously, not any vested interests, this should drive our unity.

Building such unity is the real prize worth achieving.

The opportunity is to build a broad front to campaign on the key issues of the day, all the time advancing the principles and our common interests.

Setting out the principles should be the subject of widespread debate, as in this forum and the recent ‘Way Forward’ seminar in Dublin. 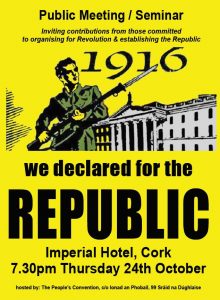 The People’s Convention is hosting such a seminar in Cork at the end of October, entitled “We Declared for the Republic”, we are inviting “contributions from all those committed to organising the Revolution and establishing the Republic”.

Ultimately, establishing the principles will require the coming together of interested organisations and individuals – perhaps to agree a short statement that can then form the basis of a united front.

Such a united front should challenge all the political trends that disarm the people today, the sham-socialists and the fake republicans.

Political and economic crisis exists, and new ones are continually coming down the road, maybe Brexit will spark a new flashpoint.  If it does then the reality is that the people are not ready to respond – they lack leadership and their courage is damaged by constant betrayal.

We have a responsibility to build such a broad front of the people.