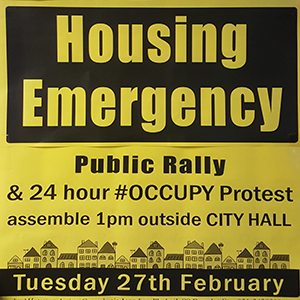 Housing Crisis must be Declared as a National Emergency

Members of City Council have been asked to join their colleagues in the County and declare the crisis in housing and homelessness to be an National Emergency.

Councillor Diarmaid Ó Cadhla has asked members of the City Council to grasp the opportunity for Cork to take the lead in tackling the housing crisis, he asked two things:

Cllr Ó Cadhla said that: “housing and homelessness is a shameful and needless scourge in our country, and it is getting worse by the week, it is an emergency.”
Ó Cadhla says that “the number of people recorded as homeless hides the true situation, many young couples are doubling up with parents, couch surfing or living apart – they don’t even appear on the homeless register.”
“he housing crisis is now such that it is preventing the creation of new families, causing emigration, and causing serious mental health issues.”
“I hope that both Council’s in Cork can stand together, declaring an Emergency on the issue and then we can appeal to all other local authorities to join in – such pressure is needed in order to move Government.
“Last week Cork County Council called on the Taoiseach to setup a National Emergency Committee on the issue, Cllr Ó Cadhla wants City Council to do the same.
Further information available from
Cllr Diarmaid Ó Cadhla
Mobile 086-3805005