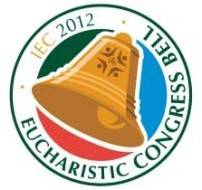 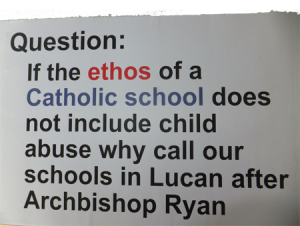 Some concerned citizens are protesting at the Eucharistic Congress in Dublin, highlighting concerns with the Catholic Church and its response to the abuse scandal.

The protests were reported by the Irish Times on Sunday 10th.

Amongst the protest groups was one including Brendan Doris, a known pro-democracy advocate, concerned parent and former school board member in Lucan, Co. Dublin.

In highlighting the issue Doris asked a simple question in some short posters:

“If the ethos of a Catholic school does not include child abuse why call our schools in Lucan after Archbishop Ryan?”

Doris explained that they posed the question like this since it is impossible to find a positive reason why the school should labour under the name of one exposed as actively complicit in covering up child abuse on a large scale.

There was a longer text as well addressing the Archbishop directly 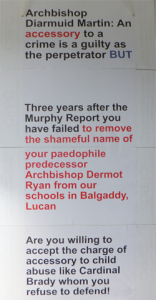 “Three years after the Murphy Report you have failed to remove the shameful name of your paedophile predecessor Archbishop Dermot Ryan from our schools in Balgaddy, Lucan

“Are you willing to accept the charge of accessory to child abuse like Cardinal Brady whom you refuse to defend!?”

Commenting on how the protest was received Doris said:

“The response from everyone – media people, some religious and clergy and some lay people and even Gardaí on duty – was that this was a no brainer for the Archbishop to sort out. We got two adverse comments of the typical contemptuous kind. This is no surprise since church and clerical abuse could not have happened if Irish society did not allow it to.

So even though one of the adverse comments questioned why we singled out the church as against others like state functionaries, Garda, medical, social services and even parents. We replied that patronage of schools carries with it the highest order of responsibility. But yes, Irish society at every level has to settle accounts with itself on this matter too.

We also explained that in the light of Irish society bearing responsibility for this issue like all others, it is up to every individual to step up to the plate. If we do then we can go a long way to eradicate the preponderance of this type of abuse which depends on secrecy and turning a blind eye.”

If anyone wants to join in the resolution of this relatively small issue they may contact Brendan Doris on Facebook or on Twitter or thefuture Initiative is happy to pass on any messages via our contact page.