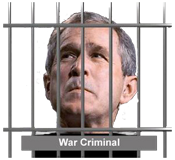 George W. Bush, former US President, has told us he approved and approves of the use of torture by American forces.  He has said so in his book and openly in the media, yet there has been no arrest made and no complaints from the current US administration that has already labelled the activities in question as torture.  Bush is doing a tour with his new book and is freely speaking in favour of ‘torture’, he says “let’s talk about water boarding”.

What did the US government authorise ?

US forces have locked prisoners in boxes with the threat of stinging by deadly insects, they forced simulated drowning, so called ‘water boarding’, forced nudity and degradation, stress positioning, beatings, physical and psychological abuse of all kinds and sleep depravity for up to 180 hours.  They illegally and secretly transported prisoners across different jurisdictions to facilitate torture, to escape the ‘rule of law’.  The CIA have been central in all this and it is widely believed that these activities continue today, sometimes directly, sometimes by proxy using‘friendly’ forces, ‘independent’ contractors etc.

Some time ago, referring to this torture, Mr Obama said “it would be unfair to prosecute dedicated men and women working to protect America” for conduct sanctioned by the Justice Department.  He means that those who committed torture should not be held to account!  This is the same defence used by many Nazis at Nuremberg, that they were just “carrying out orders”, a defence rejected by those tribunals.

Basic justice demands that those who issued the orders, those who carried them out and anyone who was complicit in any way should be prosecuted – torture is a crime against humanity and illegal under both US and International law.

So why is Bush throwing torture in our faces?

They want to ‘normalise’ torture.  The use of torture is part of the growing fascism of US imperialism on a world scale and is used equally by its allies and the various regimes it sponsors in Central America, Asia, Middle East and Europe.  The US is flexing its muscle to tell people everywhere that they are strong and that ‘might is right’ – they have no respect for the rule of law, for democracy or the rights of nations.  So, it’s in our faces, we better watch out!

The good name of ordinary American people is sullied.

Millions of people around the world will not even give this talk of torture a passing thought, because to them the US is already a tyrant.  Continued efforts at world economic domination by the US, its blockades, its armies, its threats, its wars and proxy wars are nothing new – but they make this world an increasingly dangerous place.

Fascism is the preferred tactic of imperialism.

The use of fascist tactics has been more often hidden and denied, but now it is coming into the open and is argued for – just listen to commentary coming in the next period as Bush promotes his ‘book’.  Does Bush really need the revenue from a book, why the talking tour?  The US backed Israeli attacks on the humanitarian aid ships in international waters was another openly fascist act and a flagrant violation of international law.  It seems there is one international law for everyone, but not for the US or its closest allies, this also makes the world a dangerous place.

The use of torture by NATO forces, including the US, Britain, Canada and others must be opposed by all who love democracy and who oppose war as a means to solve disputes between peoples.  Ireland too is guilty of collaboration with this drive for more war, we are participating by sending some of our defence force personnel to Afghanistan as well as participation in the European Union’s Battlegroup formations and our provision of facilities at Shannon Airport to the US Military.

Civilisation demands that we oppose fascism in all its forms and whatever its source or whatever pretext used to try to justify it.