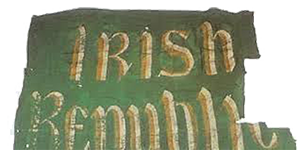 The following is the text of the talk delivered by Diarmaid Ó Cadhla at the parade held in Cork on the eve of the actual Centenary of the 1916 Easter Rising, 23rd April.

There is widespread celebration of the 1916 Rising, huge numbers are attending events to pay their respects to the men and women who marched out that week.

There is also huge respect shown for the tens of thousands who followed the example of Easter Week and took up the fight for freedom.

Nearly every family in Ireland today is connected with this history, those men and women who fought were of our families.

The question is… how do we pay respect to those men and women, our own, who gave their all in defence of the people’s rights.

We must take stock of where our country stands today, what are the conditions facing the people, where stands our sovereign and inalienable rights?

Taking stock, it is clear that if we really respect the deed of our forefathers, we must stand-up for the rights of the people today, for our own rights.

This is the theme of today’s Centenary – we must get organised as a people to assert our rights.

What our rights are is a question already answered by history.

James Connolly stated our rightful demand when he wrote the song ‘Be Moderate’ and included the words:

“Our demands most modest are, we only want the Earth”!

He was right, the people of Ireland own everything in this country, it is our collective property, our inheritance, and we must hand this on to our children and grandchildren.

James Fintan Lalor, who is on this National Monument, said the same thing:

“Ireland her own, and all therein, from the sod to the sky. The soil of Ireland for the people of Ireland.”

For hundreds of years our people have risen up in rebellion, against the most wicked conditions of oppression, but still the objectives to which they dedicated their lives are not achieved.

Just weeks before the Easter Rising Pádraig Mac Piarais responded to the question as to who should rule Ireland… he wrote in The Sovereign People:

Taking stock of our current situation… it doesn’t seem that the people are ‘lord and master’ in Ireland, we are not free.

Because…  we have been betrayed, and the betrayal continues.

The thing that generations of our families fought for, the freedom of the people, our own empowerment, has not been achieved.

Ireland is among the richest countries in the world, we are still listed at number 14 by the IMF.

BUT, we have a housing crisis that worsens by the day, local and national Government has placed the interests of ‘the markets’ above those of the citizen.

Our senior citizens live in fear of getting sick. Medical experts have said that about 350 people a year are dying needlessly on waiting lists and for lack of basic treatments.

The crisis of unemployment continues, despite official claims of economic recovery – and emigration continues.

So, the theme of today’s event is that we, the people, must get organised to assert our rights in 2016.

And make no mistake, finishing the task set out in 1916 is simply a matter of decision, we, the people, must decide to do it.

The evidence that we can do it is on our TV every day, the biggest problem to be addressed in efforts to form Government is the question of WATER.

WATER is on the agenda because the people put it there, it shows that we do have the power, we should take encouragement from that.

The power of the people lies in our unity.

Today, we call for the re-building of the unity established in 1916… again in James Connolly words:

In 1916 the people were united is the struggle to assert our national right, regardless of secondary differences of creed, social class or any Party.

We need that again, we must set ourselves the objective of our own empowerment, to ensure that the policy of our state is a reflection of the general will of the people.

We must set aside all the vested interests and anything that stops us from standing for this one objective, our own empowerment as a people.

All this starts with individuals taking responsibility, don’t not be a spectator – let’s build the movement of the people.