This was the message delivered by Maureen Quill to a group of citizens collecting a petition asking for a referendum on our membership of the European Union.

Ms. Quill is a former teacher with a history in politics, she is a former TD, member of Seanad Éireann and a former Lord Mayor of Cork city – one would expect to find an up-standing citizen.

I think we can expect that Ms. Quill is drawing multiple pensions from our public money.

Quill’s comments were made in a rude and disrespectful manner.

On Saturday last a group of citizens were exercising their right to exchange ideas and distribute information to the public, on the question of Ireland’s membership of the EU.

Ms Quill approached and told us we should “cop on” and asked this writer “what do you do with yourself?”  Her suggestion, from the exchange, was that we were unemployed, and therefore wasters, and should be grateful for whatever our EU benefactors were bestowing on us.

We explained that we were “standing up for the rights of the people and promoting debate on a very important question” the rebuff was simple and to the point: “Ye should shag off!” 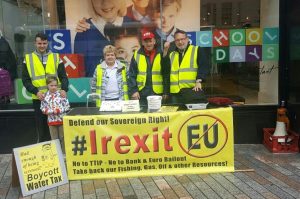 We are not over sensitive types who can’t take a bit of criticism, and respond in an appropriate spirit – but this is too much, from an individual with such profile.

This seems to be the respect that the ‘power-that-be’ hold for any citizens who dare to express ideas to challenge the elite in any way.

We have seen peaceful protestors charged, jailed and brought before courts for doing just that. We have seen Cork people effectively excluded from the public galleries at meetings of our own City Council. We have seen citizens excluded from public forums – in case they would ask difficult questions of our public representatives in Europe.

City Hall in Cork provides a constant stream of abuse towards the people and disregard for our rights, the housing department alone is a law onto itself.

Dáil Éireann is similar, once elected our TD’s ignore the people, they engage in their ‘deal’ making and agree what next to impose on the people.

Ms Quill attitude is a reflection of the attitude our state holds towards us, the citizens, it is not good enough.

We now publically call on Maureen Quill to return to our Information Stall which is outside Dunnes Stores, Patrick’s Street, Cork every Saturday afternoon and apologies to the good citizens who are doing what all good citizens should be doing – engaging in the democratic process.