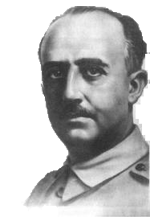 Tuesday evening this week saw a lecture entitled “The Spanish Revolution” delivered at the Solidarity Bookshop in Cork, it was given by James O’Brien, a supporter of the ‘Workers Solidarity Movement’ (WSM).  The lecture is part of a series being given at the shop throughout October/November – we already reported on the first lecture in this series, a very interesting talk about the life of Tadhg Barry.

Picture is General Francisco Franco, fascist ruler of Spain up to 1975

The speaker pointed out the origins of fascism throughout Europe from the early 1920’s, based on the effort to oppose ‘Bolshevism’ and the organised labour movement.  The victory of the October Revolution, the formation of the Soviet Union and its defeat of the interventionist armies was an inspiration to working people throughout the world.  The response of the imperial powers and the corporate industrialists was to organise and directly finance the rise of fascism to suppress the progressive movement.  Fascism was presented as a “national” socialism, as opposed to the international socialism promoted by the Bolsheviks, in a effort to divide working people.  The lecture rightly highlighted that it was German military intelligence that sent Adolf Hitler and his partners to build the German Workers Party, the NAZIS, it was no natural development from among the German people.  Industrialists, including Henry Ford, put huge funds into the development of fascism in Germany, they also sponsored its rise in Britain, Italy and Spain.  We were told that it was Britain’s MI6 that brought Franco back from the Canary Islands in order to lead the fascists – in other words the allied powers had directly supported fascism.  This is consistent with the allied powers efforts at appeasement to Hitler in the years leading up to the war – of course their hope beyond hopes was that Hitler would turn on the Soviets, this is what they had financed fascism for.

The subject of the lecture was described as “a broad picture of the forces at work in the revolution and how their ideas and actions were tested” – we thought that the lecture might have focused on the struggle against fascism and what we might learn from that.

In content there was much of interest in the lecture – in particular describing the development of the different trade union groupings, the movement for collectivisation and highlighting the significant role played by women in the struggle.  However, given the very big question of fascism we were disappointed that the ideological struggle on this front wasn’t explored to any degree – Franco or his politics barely got a mention.  One trend, the mention of which did seem to dominate, was that of the role of the Soviet Union, and in particular, the role of Stalin.  It seems clear that the WSM does not like Stalin, which is fine, but one might be left thinking that Stalin was the fascist opposing the Spanish people in their struggle.  At that time the Soviet Union, under Stalin’s leadership, was the most consistent opponent of fascism, all of the other European powers were appeasing Hitler.

An opportunity was missed in this lecture to develop the struggle against fascism, the danger of which is growing today.  We also missed hearing about the struggle waged by the Spanish people and their allies against fascism, what were the ideological questions, what were the military and organisational questions?  The same powers that appeased Hitler, that left Franco in power after the war, whose industrialists financed fascism back then are today waging wars all over the world and are threatening even more war.  As the world’s economic systems hover on the brink of complete collapse the danger of more widespread war is ever more real, equally today, the unleashing of fascism seems to be the favoured policy of the ruling elite.

We need to be wary of fascism, its ideology, its purpose and the forces that sponsor it, we need to oppose fascism.