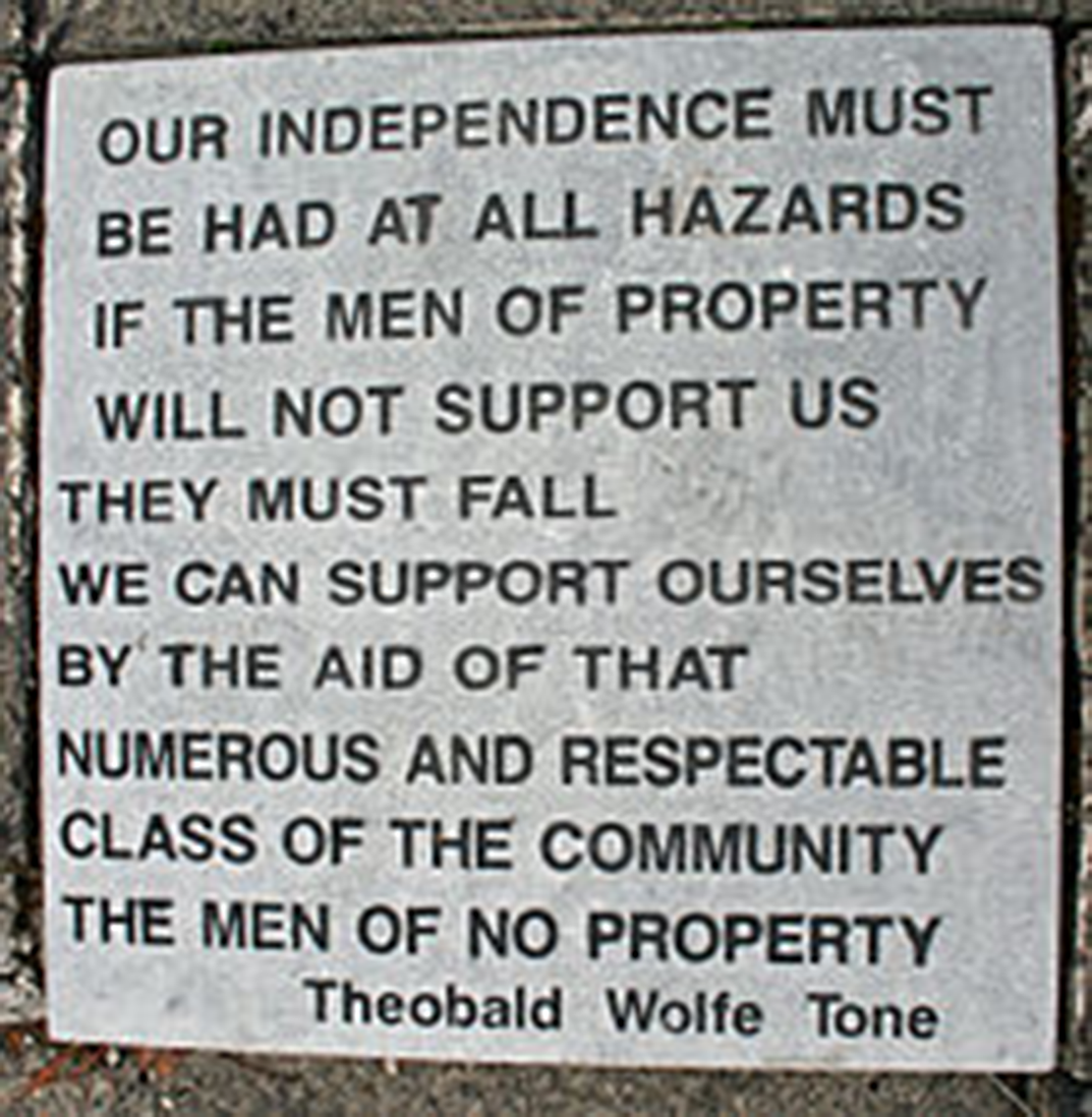 I was invited by the Independent National Commemoration Committee to 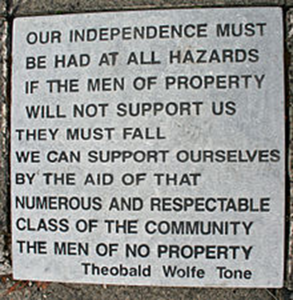 give the main talk at the Centenary of the Kilmichael Ambush, held Sunday 29th November 2020.

A .PDF file of the text may be downloaded here.

A video of the event, including some lovely singing, can be seen on Youtube.

On a damp cold night 100 years ago the men of Flying Column of the 3rd West Cork Brigade marched here to Kilmichael.  They were wet, cold and hungry.  They came here to attack the elite of British forces, the well trained and battle hardened Auxiliaries.

This elite officer corps were running around terrorising families, burning homes and killing innocents.  For an elite corps they acted most cowardly, they were bullies and hard men when they faced defenceless people.

They were unbeatable, or so they thought, but arrogance is a dangerous thing; they met their death on that cold November evening.

The men of the column, though inexperienced, poorly armed and with minimal training had a big advantage:

One of the great lessons of the Flying Columns is the importance of training, discipline, organisation and of resolute leadership.

A relatively small force, if properly organised, can defeat a superior one – this was seen throughout the war and was typified at Kilmichael, Crossbarry and elsewhere.

Discipline, organisation and leadership are vital elements of any revolutionary movement.

But what of their hearts?

What drove ordinary peace loving men to violence, what was their politics?

Some say the men of the flying columns were not political, I disagree, I think they were very political, they knew in their hearts and souls that they had to fight for the freedom of Ireland, that this was worth more than life itself – you can’t get more political than that!

The Rising of 1916 had lifted the veil, it awakened among the people what had become the ‘memory of an Ancient Glory’, it cast aside the reformers, those who had become the recruiting sergeants for the British war in Europe, costing tens of thousands of Irish lives.

The men of the column were of this tradition, their people lived through the starvation imposed by England in the genocide of the 1840s, their people were baptised in the Fenian faith.

Men like Tom Barry were not taught proper history in school, nobody was.

But while Irish history was not taught, there was, and remains, a collective memory in Ireland; maybe something spiritual, existing socially, outside of any individuals mind; a cultural awareness of who we are, an awareness of the struggles waged by generations of our people.

History was written by the servants of British rule, to conquer our minds as well as our bodies.

This was exposed in the national revival, and in the ideals of 1916 Rising.

People set about reclaiming our nationality, but when we expressed our democratic will it was once more suppressed, and revolution was the only path left.

Violence was chosen by the British, the people were left with no alternative.

What were these ideals?

The Irish Republican ideals go back to the United Irishmen, whose political objective was explained by Wolfe Tone:

“to break the connection with England”

Tone’s strategy to achieve this was:

“To unite the whole people of Ireland, to abolish the memory of all past dissensions, and to substitute the common name of Irishman in place of the denominations of Protestant, Catholic, and Dissenter”

The United Irishmen appealed to every section of society, but in the end the gentry deserted, Tone declared:

“If the men of property will not support us, they must fall: we can support ourselves by the aid of that numerous and respectable class of the community – the men of no property.”

This betrayal by the gentry was seen again in 1801, when they the claimed that they ‘were happy to have a country to sell’.

That was the same revolutionary idea of Wolfe Tone, and it was repeated by the Fenians and in the Proclamation of the Irish Republic in 1916.

The people have always been central to the Irish Republic, Pearse clarified it on the eve of the 1916 Rising, when he said:

Tone had explained that:

“There were and are only two alternatives: an enslaved Ireland and a free Ireland.”.

This wasn’t written in history books or taught to the men of the column, but they knew it anyway, it was handed down in our very nationality, in the tradition of the people.

This is what the men of the column came here to fight for.

In Ireland the ‘men of property’ still rule, north and south.

Sometimes those who rule call themselves republican and sometimes they call themselves unionists – but as far as the ‘men of no property’ are concerned they are the same, despite their labels – their true interest is money.

And sadly, what might be revolutionary politics is grossly misrepresented today.

Some masquerade as republican while they collaborate with every policy that the ruling elite imposes on us.  This is true north and south, Parties and individuals claim to be republican while they facilitate every exploiter, native and foreign.  These ‘republicans’ would take the 6 counties out of the UK, only to surrender them to the EU, swapping one master for another.

Some masquerade as socialist, but disrupt every effort of the working class to organise.

These so-called ‘socialists’ deny our national rights and preach Globalist politics, that there should be open boarders around Ireland.  But in today’s world ‘open borders’ only serve imperialism, the bankers, the giant corporations and those among us who have become their paid servants.

These so-called ‘socialists’ and ‘republicans’ bring shame on a great tradition, they have abandoned any direct appeal to the people to rise up in defence of our own interests. To them the ‘men of no property’ are the men of no importance.

These traitors have aligned themselves to the gravy train, as the song goes, they’ve gotten “the foreman’s job at last”.

We know these traitors by their meek demands – to seek a ‘better deal’, or ‘fairer conditions’, or ‘better welfare’ or ‘more jobs’.  We see their fake smiles in photographs, we see them playing the political games in Brussels, Leinster House and Stormont, they are reformist, they are to preserve the status quo.

They have abandoned the flag of revolution.

It is necessary to re-assert the revolutionary ideas of both republicanism and of socialism, which in the words of James Connolly are inseparable, he described that:

We must shape these ideas for the Ireland of today, not simply mimic the past.

We must inform the public debate and expose the lies of the ruling elite and their enslaving politics.

Simply unifying Ireland, if it means that the same ruling elite continues, would not be a revolutionary deed.

Re-establishing the Irish Republic would be revolutionary, but simply expanding the Free State would not be.

To advance the cause of Ireland, to advance the revolution, we must identity opportunities and steps to be taken which will bring us closer to our objective.

Republicans have always opposed the EU, it replaces our sovereign right with a system of rule over us by unaccountable bureaucrats, acting for powerful vested interests.

We should demand that the southern state leave the EU, such makes economic and political sense on its own, but with Brexit it makes double sense, and has the added advantage of being aligned with our northern fellow-countrymen who are currently under the sway of UK Unionism.

In this debate we can expose sham republicans for their EU Unionism and their denial of the most basic republican principle – the sovereignty of the nation.

We should ask whether nations exist any more?

If they do, then what are their rights?

At the founding of the United Nations Organisation following the end of WW2 the right to national self-determination was identified as a requirement for world peace.

Is this true any more?

If we deny the right of nations, then we must deny what the men of the column fought for.

These are fundamental questions that need asking.

No passing of laws in Brussels, in London, in Washington or in Dublin can change what the historic rights of nations are, such rights are enshrined in the blood of millions worldwide and in the necessity of the peoples to prosper and to exist.

Brexit offers an opportunity to explain the necessity for national independence in practical terms:

The men of the column did their deed, what is ours to be?

I think we must elaborate the principles that underline our republican politics, to unite all the people of Ireland, ‘oblivious of differences carefully fostered by an alien Government, which have divided a minority from the majority in the past.’

There is one nation in Ireland, not two communities, not ‘Protestant, Catholic or Dissenter’, just Irishmen and Irishwomen – and this nation has rights.

We need to build organisation that reflect this ideal.

We must take up the cause of ‘the men of no property’, we must anchor our demands with the working class and the small farmers of Ireland.

It is in our common interest that the Irish people alone should decide how our country is run, not any vested interests.

Building this unity will be the ultimate respect shown to the men of the column whose lives were taken here 100 years ago, and to the thousands of other men and women who stood with them.

Genuine republicanism needs to set the agenda and become the revolutionary leadership today.