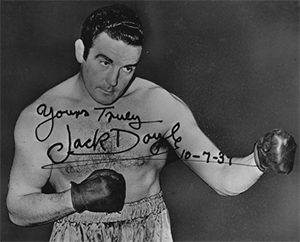 Notice of Motion in the name of Cllr. Diarmaid Ó Cadhla on agenda for meeting of Cobh Municipal Council on 12th Sept. 2017:

“That the Municipal District Council supports the idea that a statue of Jack Doyle be erected at a prominent location on the main town frontage”.
Much discussion on this has already taken place and will continue, interested parties are invited to get in touch.

It is thought that a statue would be appropriate and that it would also be a big attraction in Cobh – the above resolution was adopted.

It is hoped that a location for the statue will be agreed at the December meeting of the Municipal Council and that then the fundraising will commence and the work put out for quotes.