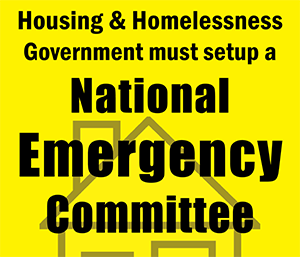 The following Press Release was issued by the Housing Action Group in relation to it’s 3rd 24-hour protest.

Tomorrow, Tuesday 17th April at 10am, the Housing Action Group embarks on it’s 3rd 24-hour protest outside City Hall in Cork.  The protest group is calling on Government to setup a National Emergency Committee on the issue of Housing and Homelessness.

Spokesperson for the group, Cllr Diarmaid Ó Cadhla, said the death of yet another homeless man, in a hospital waiting room, underlines the urgency, he said:

“Government is not treating this issue with the urgency needed, their housing plans are a shambles and every week more and more people join the official list of homeless people.  However, the official figures only include those registered with homeless services, there are far more families and single adults couch-surfing or doubling up with relatives.”

The Housing Action Group says that a National Emergency Committee is needed in order to bring together the stakeholders and to call on all skills possible to resolve the crisis.  Ó Cadhla says that an emergency committee should call on the public to assist and then be able to recommend special legislation to address the different aspects of the crisis.

“For example, the vulture funds should be thrown out of Ireland, and their properties re-possessed by compulsory purchase order.”

Ó Cadhla says: “We need to interfere with the right to private property, where it is being used against the public interests, rogue landlords need to be curtailed.”

The Housing Action Group is canvasing Local Authorities through the country to declare an emergency and to call on Government to setup a National Emergency Committee immediately.

The campaign group says it will continue to protest until the issue is resolved and their actions are expected to spread to other counties.