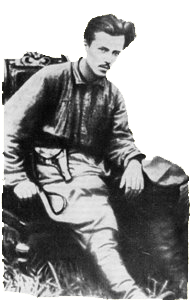 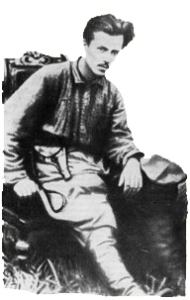 The following is something we came accross on reading the book “How the steel was tempered”, it’s message is thought provoking and maybe puts life in perspective.

“Man’s dearest possession is life. It is given to him but once, and he must live it so as to feel no torturing regrets for wasted years, never know the burning shame of a mean and petty past; so live that, dying, he might say; all my life all my strength were given to the finest cause in all the world – the fight for the liberation of mankind.”

We include some biographical notes on the author and an additional article by Anna Karavaeva who worked with him.

Born on 29 September 1904 (16 September, Old Style), the fifth child of poor worker parents in the village of Viliya in western Ukraine. He father was a seasonal laborer and his mother the daughter of a forest worker. Attended the village church school until he was nine. In 1913 he worked as a herdsboy. In 1914, family moves to railroad town of Shepetovka. He enters elementary school, but is expelled by scripture teacher. After that he worked in the kitchens at the railroad station, but was dismissed in 1917 for sleeping on the job. He found work in a timber yard, then in 1918 he became a stoker’s mate then electrician at the local power station. When the Germans occupied the town in spring of 1918, Ostrovsky ran errands for the local Bolshevik underground. In July 1918 he joined the Komsomol and the Red Army in August. He served in the Kotovsky cavalry brigade. During 1920 he was wounded near Odessa and contracted typhus. He returned to action but was again wounded near Lvov and sent to hospital in Kiev. In October he was demobilized on medical grounds. In 1921, he began working in railway workshops of Kiev as an electrician and as secretary of the local Komsomol.

He suffered from rheumatism and typhus and in August 1922 he was sent to Berdybsk, a resort on the Sea of Azov, for treatment. In October 1922 he was officially declared an invalid. However he continued working. In 1923 he was appointed Commisar of the Red Army’s Second Training Battallion and Komsomol secretary for Berezdov in western Ukraine. In January 1924 he went to Izyaslav as hed of Komsomol district committee. In August 1924 he joined the Communist Party. The year 1925 he spend in Kharkov for medical treatment. In May 1926 he went to a sanatorium in the Crimea. By December 1926 polyarthritis deprived him of almost all mobility and be became virtually bedridden. Nonetheless, in December 1927 he began a correspondence course at the Sverdlov Communist University in Moscow and he completed it in June 1929. In August, he lost his vision.

In 1930, undaunted by his paralysis and blindness, in Sochi, he began work on first novel, How The Steel Was Tempered. He also wrote articles for newspapers and journals and spoke often on the radio. In April 1932 he became a member of the Moscow branch of the Association of Proletarian Writers and in June 1934 he joined the Union of Soviet Writers. On October 1, 1935, he was awarded the Order of Lenin. In response, Ostrovsky wrote to Stalin:

Dear, beloved Comrade Stalin! I want to address to you—our leader and teacher, the most dear human being for me—these few firey, heart-felt words. I shall strike blows at the enemy with a different weapon, one with which I have been armed by the party of Lenin and Stalin, which took a poorly educated worker and raised him up to be a Soviet writer.

He died on 22 December 1936, aged 32. His second novel, Born of the Storm, begun in January 1924 and concerning the Civil War in Ukraine, remained unfinished.

thefuture Initiative: The above passage is a biographical note on Nikolai Ostrovsky and his novel from the 1930’s, an additional article is available here.  – we though it was worth publishing.